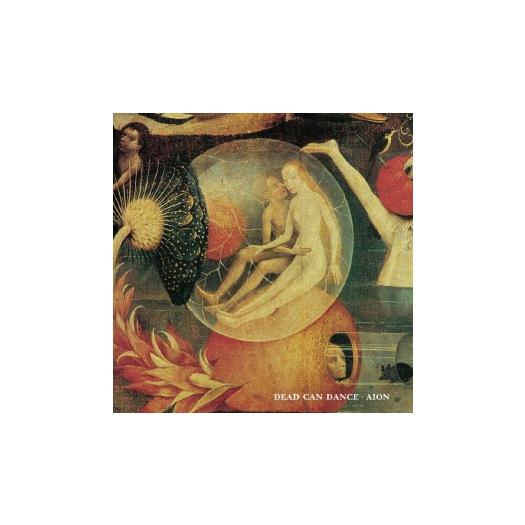 1990 marked the release of Aion, 12 songs written and produced by Brendan Perry and Lisa Gerrard predominately recorded at their own studio in Southern Ireland. Shortly after the release of Aion, Brendan and Lisa scored their second film for Spanish Director Augustin Villaronga, La Muerte Y La Primavera. Their first film score for El Nino De La Luna, in which Lisa made her acting debut, was selected as the official Spanish entry for the Cannes Film Festival.

Their reputation growing by leaps and bounds, including a huge underground following in the U.S. - they were able to tour there even without one domestic release available, while at one point Dead Can Dance was the biggest selling band in 4AD's history - Perry and Gerrard once again did the business with Aion. Its cover taken from Bosch, Aion's medievalism was worn more openly than ever before, with songs adapted from centuries-old material. The beautiful, entrancing 'Saltarello', with lead performance by what sounds like an old wind instrument, comes from an Italian dance of the 14th century, while the mysterious moods of 'The Song of the Sibyl' derive from 16th-century Catalonia.

The standout track is 'Fortune Presents Gifts Not According to the Book' with lyrics from a Spanish poet. The musical combination of softly plucked guitar and buried organ drone is striking enough, swathed in reverb, but when Perry steps in with his vocals, matched by more sparkling keyboards, the result is yet another high point for a band laden with them. Guest performers once again assist throughout, including Perry's brother Robert on haunting, quite non-clichéd bagpipes for 'As the Bell Rings the Maypole Spins' and singer David Navarro Sust, returning again to contribute some fine backing work.

Tracklisting
1. The Arrival And The Reunion
2. Saltarello
3. Mephisto
4. The Song Of The Sibyl
5. Fortune Presents Gifts Not According To The Book
6. As The Bell Rings The Maypole Spins
7. The End Of Words
8. Black Sun
9. Wilderness
10. The Promised Womb
11. The Garden Of Zephirus
12. Radharc