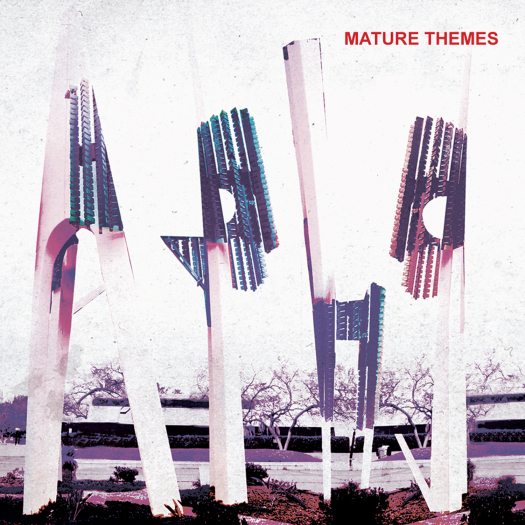 Before Today was the band’s 4AD debut, offering the first sign that the intriguingly scatalogical music Ariel had been making for over a decade was finally ossifying into a coherent form. Indeed, the lead song from Before Today - the inimitable ‘Round and Round’ - was awarded Pitchfork’s track of the year for 2010, and further plaudits were heaped upon the long player as it cropped up in near-all end-of-year polls. For many it seemed that Ariel had finally reached the wider audience his early recordings had hinted was possible. And with Mature Themes, Haunted Graffiti have forged a record that raises the bar once again.

Installing themselves in a studio space in downtown-LA, Haunted Graffiti began a lengthy process of writing and recording. Mature Themes is a self-produced affair, with former member Cole MGN drafted in to provide some drum programming and additional mixing duties. Far removed from Ariel’s early bedroom recordings, Mature Themes is a product of a more collaborative process, with the often-overlooked virtuoso musicianship of the band bought to the fore. "There are definitely not any links to my lo-fi origins”, Ariel recently told Spin magazine. “It's so diverse but so different from anything I've done before. In a sense, it’s really the record I wanted to make back when I made Before Today, but couldn't. We had time to let our hair down and try new things."

1 Kinski Assassin
2 Is This The Best Spot?
3 Mature Themes
4 Only In My Dreams
5 Driftwood
6 Early Birds of Babylon
7 Schnitzel Boogie
8 Symphony of the Nymph
9 Pink Slime
10 Farewell American Primitive
11 Live It Up
12 Nostradamus & Me
13 Baby*
*Not intcluded on physical LP but included with download