In stock
SKU
CAD-3123
Pre-order LPs will be on limited edition white vinyl and come with MP3 download code      Strange Mercy, the beguiling new album from St. Vincent, is an unsparing examination of personal catharsis cloaked in some of the most sublime music of Annie Clark's career. “Many of the songs are about wanting relief from pain, and searching high and low for release,” attests Clark.  Such powerful emotions prompted — demanded, really — not just a bracingly candid lyrical style but a new musical approach.  St. Vincent's acclaimed 2007 debut album Marry Me was created almost entirely on a laptop; the exquisite follow-up, 2009's Actor, was a collection of arrangements fashioned into ornately structured songs.  Strange Mercy, she says, is different.  "I just wrote the songs first and didn't worry about the embellishments.  On the last album, I could play about three songs by myself on guitar.  On this album, I can play every song that way."    Strange Mercy features very little of the baroque strings, woodwinds, and reeds that marked Actor, and the grooves are sturdy, deep and beguiling.  "I wanted to make things direct and immediate," Clark says.  "I didn't tinker.  I tried to keep the arrangements pretty simple and use just enough instrumentation to get the point across.  I didn't want anything to get in the way."  Consequently, it's a much more guitar-oriented album than Clark has ever made.  Clark is one of the most gifted guitarists to come along in the new millennium, and Strange Mercy is filigreed with indelible hooklines and ingenious rhythm parts, not to mention a concise and debonair solo on "Neutered Fruit" and a couple of Frippy freakouts on the glorious "Northern Lights."    And with all that musical real estate opened up, Clark literally sings more on Strange Mercy than on the previous two — there was just much more to say.  So the voice is paramount, shape-shifting to the demands of each song: on "Chloe in the Afternoon," Clark goes breathless and high; on "Cruel," she's practically wailing; she's languorous on "Surgeon" and r&b-inflected on the title track and "Dilettante."    Clark again conjured her impeccably vivid soundscapes with brilliant producer/engineer John Congleton (Okkervil River, Wye Oak, Explosions in the Sky).  Ace modern gospel organist Bobby Sparks "did all the really sexy keyboard parts," Clark says, helping to take St. Vincent's music where it hadn't gone before.  Midlake's McKenzie Smith reprised his Actor role and once again played drums.  Also contributing were Daniel Hart, Evan Smith and Beck's musical director Brian LeBarton.    "Chloe in the Afternoon" is a stunning opener, vaguely sinister and frankly kinky, serving notice of the album's intense candor and darkling tone.  "Cruel" is St. Vincent you can dance to, like some phantasmagorical Abba track.  The aqueous confessional "Cheerleader" is the thematic touchstone; Clark is just not going to politely mince words (or sounds) anymore.  "Surgeon" blurs the line between summer daze and barbiturate haze, its suave '60s Euro-pop miraculously morphing into a slinky disco inferno, keyboards dissolving into a blaze of hysteria.  The heartbreaking "Strange Mercy" is an almost Hendrixy ballad, the album's soulful core, strong at a broken place.     Strange Mercy is what happens when the very picture of elegance and poise confronts turmoil and grief: You can either gaze in mute despair at those pieces lying on the floor, or you can make something beautiful, even transcendent out of them, but only by confronting yourself.  "Marry Me is very cute — it's funny and sarcastic, and that's fine, I was 22 and that's who I was," Clark says.  "And Actor was cerebral — not that I would have known how to do it any differently — but I’ve grown beyond that now.  I want to make a record that's more human every time."
Skip to the end of the images gallery 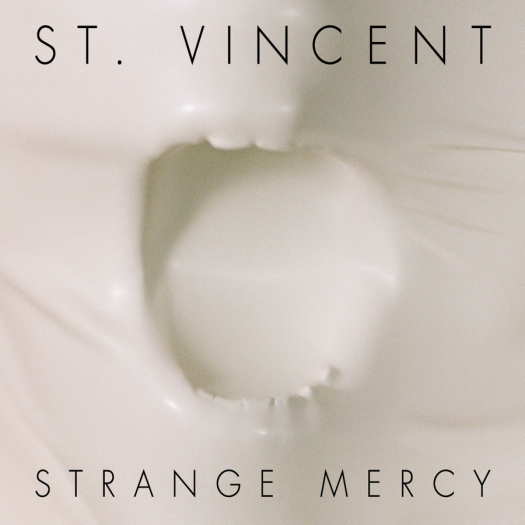 St. Vincent, the nom-de-stage of Annie Clark, third album and first for 4AD, is entitled Strange Mercy. Having worked together on 2009's Actor, Clark reunited with producer John Congleton and recorded the album in her hometown of Dallas, TX at Elmwood Studios. The eleven new tracks showcase Clark's gift for fusing the cerebral and the visceral, her melodically elegant arrangements packing hefty emotional punches.

Clark's virtuosity has long been recognised, and Strange Mercy finds St. Vincent redefining the idea of the guitar hero, utilising the instrument as a pointillist artist might wield a brush. Countless judiciously placed riffs and instrumental flares, each distinct and unique, cohere into grand tableaus. On 'Cruel', she elicits punchy bursts like an R&B horn section. 'Cheerleader' froths and boils, with deep and fuzzy guitars bubbling up to the surface, while 'Surgeon' twirls about endlessly, Clark's vocals dancing amid a blizzard of notes.

Strange Mercy isn't an entirely solitary affair either, with Clark joined by a host of other musicians. Included among them are Grammy Award winning Bobby Sparks on mini Moog, clavinet, Arp and Wurlitzer, Midlake's MacKenzie Smith on drums and Daniel Hart on violin. Also contributing were Beck keyboardist and musical director Brian LeBarton, Evan Smith on woodwinds and Phil Palazzolo.